For the last 5 years or so I have been working with a small meditation group – we meet up on Wednesday mornings. For the last two years I join in via Skype. We also produce art. The sessions  are led by Debbie Howard. We post on IG as #Soulseedsessions

We have been using Thubten Chodron’s book “Guided a Meditations on the stages of the path”.  Every so often I get blown away by the images that I ‘see’ in my head . This week I was a bit behind with the group due to the holidays. The meditation was called ‘Taking and giving, the great resolve and the altruistic intention or Bodhicitta

There have been some painful family circumstances  recently.  I feel saddened and helpless by the refugees situation unfolding in Europe every night on my TV screen.

During the meditation Chodron asked you to visuaize a plume of smoke coming out of someone’s body and  then you inhaling it – this causes an explosion of light within your body as you accept the suffering and in doing so cleanse your own.

I felt overwhelmed by the smoke during the meditation – because it felt like there was so much to inhale , it never stopped coming.

Below are a couple of stages 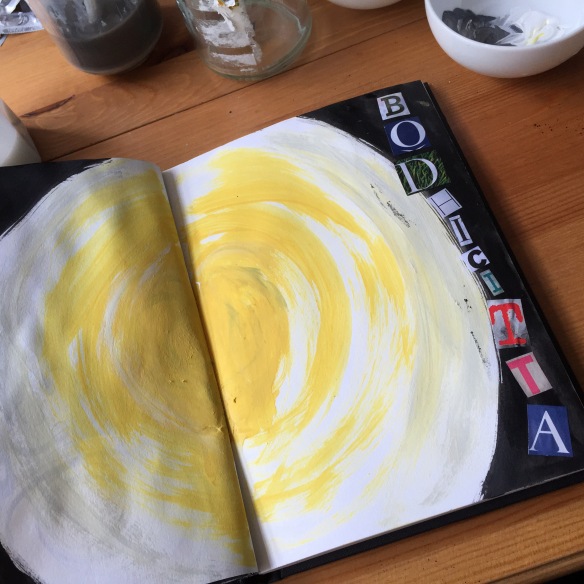 Below is my final head I wanted to join it up with the figure  on the left – it felt like it belonged too much to the figure on the right  . I am still borrowing heavily from Picasso /Guernica in this journal. 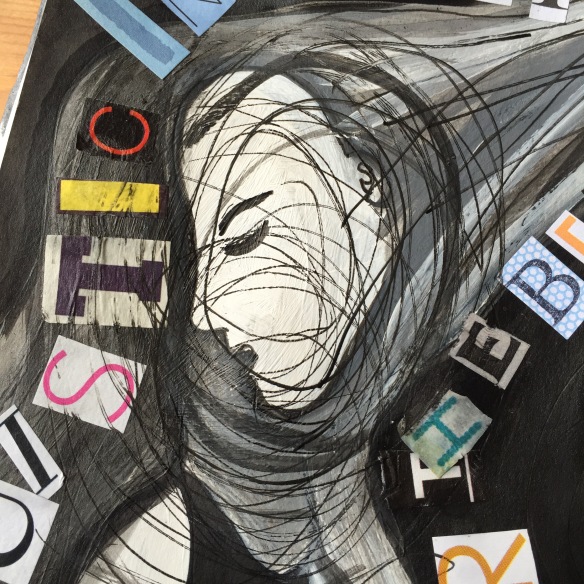 “Upon mounting the chariot of Bodhicitta

Which carried away all despondency and weariness

What sensible person would despair

At progressing in this way from joy to joy?

I do not feel that I take on board all that I encounter in this process, but I am open to the experience and it has been a good learning practice .  Especially during our  move away physically from friends and family to Edinburgh .